Our founder, Rick Violette Jr., sadly passed away on Oct. 21, 2018, but his legacy of dedication to the horses lives on through the TAKE2 and TAKE THE LEAD Programs.

A graduate of Lowell University in his native Massachusetts, Violette began working on the backstretch at Suffolk Downs. He was assistant trainer to Emile Allain at Woodbine Race Track in Canada for two years, then went to New York to take the job as assistant to David Whiteley. He started his own public stable in 1983. Top horses developed by Violette include the Grade 1 Jockey Club Gold Cup and Whitney winner Diversify, as well as graded-stakes winners Citadeed, Dream Rush, Gitchee Goomie, High Finance, Man from Wicklow, March Magic, Nijinsky’s Gold, Read the Footnotes, Samraat, Savedbythelight, Upon My Soul and Worstcasescenario.

In addition to serving as former president of the NYTHA and director emeritus of the THA, Violette was a member of the NYRA Board of Directors. He held the post as chairman of the New York Jockey Injury Compensation Fund for more than a decade. He was widely recognized for his work in leading NYTHA through the bankruptcy and reorganization of NYRA; negotiating the horsemen’s share of VLT revenues and anticipated backstretch improvements at the NYRA tracks; the reorganization and strengthening of the Backstretch Employee Service Team; and acquiring state of the art equipment for the New York Drug Testing and Research Program, as well as being an advocate for the welfare and safety of the racehorse through his work as a founding Board member of the Thoroughbred Aftercare Alliance and creator of the TAKE2 Second Career Thoroughbred Program. Rick Schosberg, born in White Plains, NY, was introduced to horse racing by his parents, Jane and Paul, who own Pine Lane Farm in Westchester County.

Schosberg graduated from Cornell University in 1984 with a degree in applied economics concentrating on animal science and equine studies. After working with show horses and at the Middleburg Training Center in Virginia, he returned to New York and served as assistant trainer to Sid Watters Jr. and Tom Skiffington before going out on his own in 1988. He won with his very first starter, Three Chopt Road, at Belmont Park that September. The conditioner of champion Maria’s Mon and multiple Grade I winner Affirmed Success, he limits his stable to 20 to 30 horses, and races exclusively in New York.

Schosberg and his wife Dawn live in Muttontown, NY. Son Ryan is a graduate of Boston University.

Schosberg served his first term on the NYTHA Board starting in 2011 and is Chair of the Aftercare Committee. A founding member of TAKE2, he was named President in December of 2018, and joined the Board of the Thoroughbred Aftercare Alliance in 2020. Cinthia Ane’ McGreevy joined the Board of Directors of the TAKE2 Second Career Thoroughbred Program, Inc. in March of 2017 and was named Vice President in December of 2018. An accomplished equestrian and a horse owner, McGreevy, along with her trainer Debbie Ward, competes in the hunter/jumper divisions. She is married to noted bloodstock agent Tom McGreevy, and repurposes horses retired from racing for the show ring.

McGreevy has participated in the TAKE2 Thoroughbred League with her off-the-track Thoroughbreds. She is dedicated to repurposing and finding homes for racehorses when their careers at the track are over. “That’s my passion,” she said. After graduating with a Bachelor’s Degree in Business Administration from the University of Miami in 1970, Pat promptly went to work for his father, Hall of Fame trainer Tommy “T. J.” Kelly. He started his own public stable in 1977.

Kelly has been actively involved in horsemen’s issues for many years. He has been a member of the New York Jockey Injury Compensation Fund and has served as a trainer representative on pension funds for backstretch workers for over a decade. Further, Kelly, the long-time Vice President on the New York Thoroughbred Horsemen’s Association, is now an alternate on the NYTHA Board and a member of the NYTHA Aftercare Committee.

Kelly has won numerous New York and graded stakes races. Among his career highlights was Evening Attire being presented with the Secretariat Award as the top New York horse by the New York Turf Writers Association in 2002. Evening Attire won the Jockey Club Gold Cup that year. 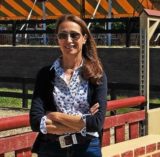 Adele Einhorn joined the TAKE2 Board in September of 2019 after serving as a consultant and advisor for the organization since its inception in 2012.

Einhorn has a master’s degree in education, and also spent 12 years in Denmark, where she was the proprietor of a restaurant. She splits her time between Saratoga Springs and Vermont. Brooklyn native Herb Oster, a racehorse owner since 1999, has been a racing fan since his childhood, and began riding the subway out to Aqueduct as a teenager. Now a resident of South Florida, he established the financial planning firm Oster Financial Services in the 1980s. After his children finished college and were married, he was able to realize the lifelong dream of owning racehorses. Oster has been managing partner of two racing stables, Team Five Star and Herbert J. Oster, LLC. He also participates in the New York breeding industry.

Oster, now a resident of Florida, has two children and four grandchildren, who often join him on his morning trips to the backstretch. Mike Shanley has worked as an attorney, judge and real estate executive in the Albany area for more than 35 years. His legal background combined with his extensive experience working with the New York State Legislature in Albany proved to be an important asset to New York’s horsemen as Shanley led the NYTHA Legislative Committee through the renewal of the NYRA Franchise agreement and the extensive negotiations for VLT revenue.

Shanley was elected to the NYTHA Board in 1999 and served for 20 years. He is a founding member of the TAKE2 Second Career Thoroughbred Program.

He and his wife Lyn are involved in all aspects of the horse industry.  In addition to racing, they currently have mares in New York and Kentucky.

Patti Violette Taylor is the sister of TAKE2 Second Career Thoroughbred Program founder Rick Violette Jr. She was introduced to the equine world by her mother, Bea, who took the two siblings to horse shows when they were kids, simply because she loved the horses.

While Rick made a career in the Thoroughbred industry, Patti attended the University of Lowell in her native Massachusetts to get a degree in business, and worked as a senior retail executive for over 30 years with Macy’s, Filenes and Lord & Taylor. She relocated to Florida in the 1990s with her late husband, Percell Taylor, who was a veterinarian for the USDA-APHIS.

Patti stayed connected to horse racing and developed a commitment to aftercare through Rick. She has also served as an advocate for the Alzheimer’s Association.

A native of Massachusetts, Andy Belfiore grew up riding show horses. She started her career in racing on the backstretch at Belmont Park, working as a hotwalker, groom and exercise rider, before joining the Rick Violette stable as assistant trainer. After six years as Violette’s assistant, she moved to the frontside at the track, and spent five years in the communications and marketing departments at NYRA.

Belfiore left NYRA in 1993 to take the post as editor in chief at the Thoroughbred Daily News. During her tenure, the TDN grew from a four-page publication with just a few hundred subscribers to a leader in the Thoroughbred industry. Named Director of Communications for NYTHA in December, 2011, and Executive Director in September, 2015, she was instrumental in the creation of the TAKE2 and TAKE THE LEAD Programs. After two years as a consultant for NYTHA and as Project Manager for the national Thoroughbred Horsemen’s Association, she took over as Executive Director of the Florida Thoroughbred Horsemen’s Association in October of 2021.

Dionne Johnson is the business manager for the New York Thoroughbred Horsemen’s Association. She started working part-time for the organization in 1983 and became a full-time employee in 1985. A stalwart advocate for the horsemen, the backstretch workers and the horses themselves for more than 30 years, Johnson was instrumental in getting the TAKE2 and TAKE THE LEAD Programs started and has served as the bookkeeper since the start.

Johnson is a resident of Valley Stream, New York, and is the mother of one son, Terrell.

Kristen earned her Bachelors of Science in Equine Industry and Management from the University of New Hampshire in 2018. Selected for the Kentucky Equine Management Internship (KEMI), she moved to Kentucky and worked on a Thoroughbred farm, prepping sales yearlings and caring for horses on layup from the track.

She transitioned to administrative work with the NYRA Horse ID team during the Saratoga 2020 meet, and joined NYTHA following the Saratoga meet. One of her primary duties for NYTHA is assisting with the TAKE THE LEAD and TAKE2 Programs.

Help Us Continue Our Work